Novation has recently launched an updated version of their Launchkey Mini (Mk3) MIDI keyboard controller and it seemed like an excellent companion to the Novation Circuit groovebox I already owned.

The Launchkey Mini Mk3 is reasonably priced, it's from the same maker as the Circuit, and they look very good together: both of them are exactly the same height and are made of the same materials.

I'm running the most recent firmware on both devices:

There are two ways to connect the devices: (i) using MIDI cables for a hardware-only setup, or (ii) using an intermediary computer as an USB MIDI host.

The Launchkey only has a MIDI Out connector for hardware setups, but it appears to also support MIDI In when using it through USB.

Hardware only with MIDI

As MIDI devices have been shrinking in size, a new MIDI plug standard has been developed around a common 1/8" (3.5mm) TRS connector (think headphones), this means that in order to connect with regular MIDI devices an adaptor is required. Also, there are 2 variations of this new plug: Type A and Type B. And both look exactly the same.

This means I was not able to use the 2 adaptors included in the Circuit to connect it to the Launchkey, since they require different types on each end. Instead, I ordered a Type A breakout cable from Amazon, and I used one Type B adaptor from the Circuit with a regular MIDI cable.

In other words, the required chain would be:

However, what I ended up doing was purchasing a 3.5mm TRS cable (standard audio "AUX" cable), which I then cut in half, rewired 2 cables and soldered everything back again. It's a super simple soldering project that shouldn't take you more than a few minutes, just make sure to verify the connections with a multimeter. The end result is a much smaller cable that doesn't need any adaptors.

Here's a great post by Eric Skogen that has all the schematics you would need and a more detailed explanation of the "Mini MIDI" standard, but in summary, you have to identify the Tip and Ring cables and switch them up.

Another option is to use a computer as a MIDI Host to link between different MIDI devices and route their signals to each other.

On macOS Catalina (10.15) I'm using a small application called MIDIRouter. The app has a dependency on the portmidi library; it won't run without it, but it won't tell you if you don't have it. If you already have brew, you can install the dependency by typing brew install portmidi into your terminal.

MIDIRouter is as simple as it gets. Make sure to keep your computer awake with the app running, and then just configure it to:

The Circuit has a very simple MIDI interface:

The Circuit only supports 4 different drum samples, but the Launchkey has 16 pads (2 rows, 8 columns). I repeated each drum 4 times in a mirrored pattern for "better" finger-drumming. 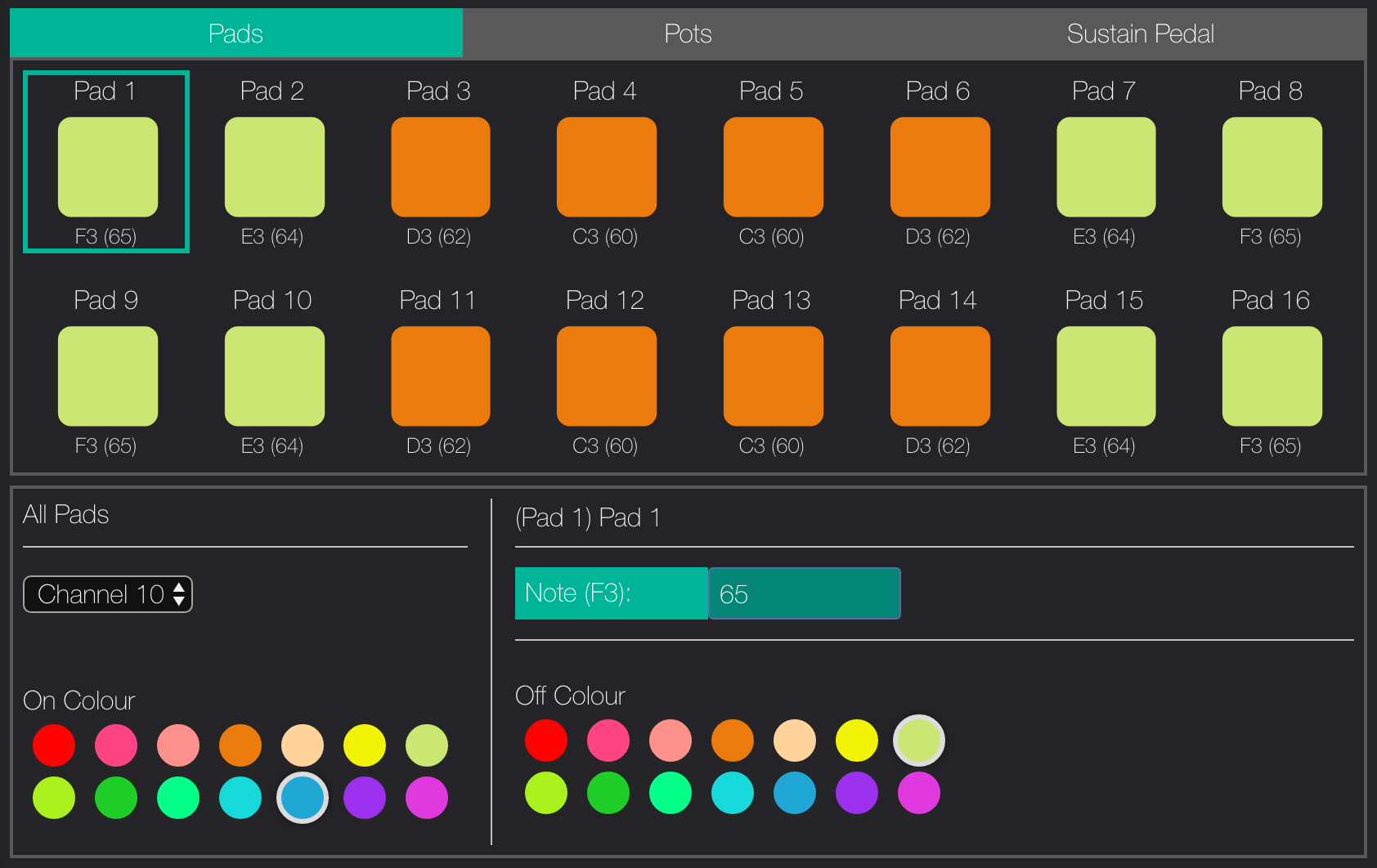 Other than that, I didn't mess with the pots since I'm not planning on using them on the Launchkey. The Circuit has encoders while the Launchkey has pots, and that makes for a weird mapping. I'm not sure if the Launchkey Mini Mk3 supports linking PGM parameters to the pads, but if it did it'd allow for some sweet configurations.

Remember to change scale mode in the Circuit to chromatic (bottom right) to be able to use the keyboard properly, selecting any other scale will make you keyboard play the closest note in the scale (ie. in a C major scale, pressing the C key on the Launchkey will play a C note as expected, but pressing the C# key will also play a C note). I guess this would make it easier to "improvise" by mashing the keyboard carelessly when using a scale?

To switch between the Synth 1 and Synth 2, you have to change the MIDI channel in the Launchkey, this is done by pressing both the Shift and Transpose buttons on the Launchkey and then selecting the channel with the pads:

I would love it if it'd be possible to program the Launchkey to use the bottom row of the pads to select and display the current MIDI channel, from 1 to 8. Maybe using PGM parameters in a future update?

If you want to properly use the arp functions in the Launchkey, it must be synced to the Circuit's master tempo.

There are 3 options that I've though of, but I have not tried them all yet. More testing is required and I will update this post onxe I have some results.

Macro controls (the 8 encoders in the Circuit) are funky when mapped to the Launchkey's pots. I've never liked mixing encoders (infinite revolutions) with potentiometers (limited turning), so I prefer not to use them at the moment.

The Record and Play buttons on the Launchkey do nothing. You have to use the Circuit's.

I have not been able to use the sustain and modulation touch bands on the Launchkey, it appears that the Circuit does not support pitch and modulation controls at all.

I have not tested using a sustain pedal. I probably won't anytime soon, since I would mostly be using the setup for bass lines and arp chords.

Beanstalkd is a "simple, fast work queue". Originally created for web applications, it's so simple that it can be used on any project that requires async job processing. In my case, it's a must for any web project of medium complexity. Thanks to its simplicity and popularity, the beanstalkd service has been compiled and ported to most OSs, including macOS, and there are client libraries for almost every language.

I've written this guide to install and configure the core beanstalkd service on macOS, as well as a helper monitor utility to simplify my web development workflows. (This guide has only been tested on macOS High Sierra and macOS Catalina.)

Installation requires Brew, the package manager for macOS. With brew, there's already a published tap/formula for beanstalkd, so you only need to type:

As a note, macOS is not very friendly to some services. If you think your beanstalkd installation is misbehaving, you can nudge it with:

There are some tools recommended by the official beanstalkd project to monitor and debug the service. For me, the simplest and most straight-forward monitor is the PHP-based beanstalk_console by ptrofimov. Also, since this is a PHP project, we can install it locally in macOS and run it with the built-in PHP standalone server.

To locally install the project, you will need Composer, a PHP dependency manager (you can quickly check if it's installed by running composer --version on the Terminal). If you don't already have Composer, installation is as simple as typing:

Once Composer is installed, this one-liner will install and configure the beanstalk_console monitor (replace path/to/install to your desired install location):

We'll also create a helper run.sh script inside the path/to/install directory. This script prepares your dev environment by restarting Beanstalkd, launching a local PHP server with the monitor, and finally opening a new tab on Chrome pointing to it (127.0.0.1:8005).

Don't forget to make it executable:

After running the script, you Terminal should display: